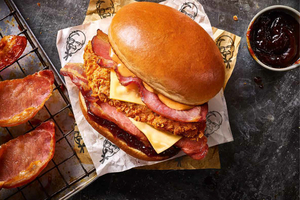 While other fast food chains are scrambling to cater to vegans with meat-free burgers and the like, KFC is being unrepentantly meaty.

In the brand's latest provocative U.K. campaign via Mother, it pokes fun at vegans (and itself) in promoting its new I Love You Bacon Burger. Taglines on the outdoor ads include "Try One Before You Turn Vegan," "Best Before 2019" and "Vegan Sausage Roll It Ain’t." The last is a jokey dig at sandwich chain Greggs, which debuted a vegan sausage roll earlier this year; the ads are being placed in proximity to Greggs outlets.

The bacon burger is a limited edition product, available for a six-week period--and KFC's approach is to be upfront about the fact that, in the year that veganism went mainstream, its timing sucks.

Marcus Buck, senior brand manager at KFC comments in a statement: “Let’s face it, we’ve timed this burger badly. We’re launching the I Love You Bacon Burger in a year when unprecedented numbers of people are eschewing meat and embracing the aubergine. But for those bacon lovers that remain, this one’s for you. It’s so irresistibly tasty–try one before you turn vegan.”