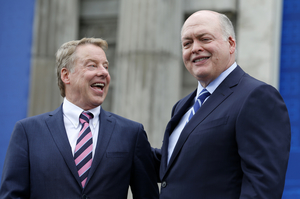 Ford Motor Co.'s top executives Thursday promised shareholders that difficult decisions made last year are setting up the company for stronger performances in 2019 and beyond.

During the company's annual shareholders meeting, CEO Jim Hackett and Executive Chairman Bill Ford pointed to strong first-quarter earnings — and a corresponding surge in Ford's stock price — as signs that Hackett's controversial global reorganization was necessary. Since the start of the year, Ford's stock price has risen 34 percent, and last month it topped $10 a share for the first time since August. Shares were trading down 1 percent to $10.24 on Thursday in afternoon trading.

"I think our stock price kind of languished as a result of us slogging through some very necessary but difficult changes," Ford said. "We're not where we're going to be, we know that, but we're very pleased that the results of a lot of the hard work that took place in 2018 are starting to show in 2019 and that our stock price is responding."

Hackett, who has spent considerable time in his first two years as CEO defending his plan to Wall Street analysts, said Thursday his so-called redesign was not "moving too slowly, nor was it too futuristic," and that it is finally showing positive results.

"The optimism in the company is higher now," Hackett said. "We've turned that corner."

Recession planning
Hackett last month vowed that Ford would be ready for any upcoming recession, and shareholders Thursday pressed for details.
CFO Bob Shanks, who retires next month, reiterated the automaker's position that it is working to ensure the company could break even if U.S. industry sales plunged to 11 million per year.

He said Ford would be able to break even if the annualized selling rate — which was 16.41 million in April, according to the Automotive News Data Center — hit 11.5 million. In 2009, automakers sold just 10.4 million vehicles in the U.S.

"We've been thinking about the design of our business such that it doesn't only make money in great times," Hackett said. "We have to be a vibrant business through all cycles."

Responding to a question about a potential spinoff of the company's Smart Mobility business, Ford said it's not something the automaker was considering because the sector is rapidly evolving.

Among shareholder proposals, voters rejected an annual request to eliminate the Ford family's special class of shares. Ford said 65.7 percent voted against the change, up from 63.9 percent last year.

For the third year in a row, Ford conducted its annual meeting solely online, a departure from in-person gatherings of the past in Delaware. Some shareholders have complained, but the automaker said it can answer more questions and reach more shareholders with the virtual format, and General Motors has said it would move to a similar online-only format.