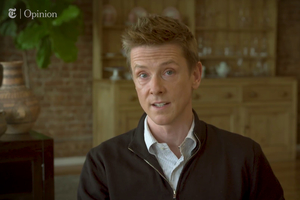 Chris Hughes, a co-founder of Facebook, says some nice things about Mark Zuckerberg in a lengthy new essay he’s written for the Sunday edition of The New York Times, which the paper has released online today along with a companion video (above). For instance, “Mark is a good, kind person.” But he also says that “Mark’s influence is staggering, far beyond that of anyone else in the private sector or in government” and declares that the "government must hold Mark accountable.” How? Well, that’s obvious from the title of the essay: “It’s Time to Break Up Facebook.”

This isn’t your standard, strongly-worded Times guest opinion piece. It’s a call to arms, and it gets personal. For instance, targeting Zuckerberg again (while not letting himself off the hook), Hughes writes,

I’m angry that his focus on growth led him to sacrifice security and civility for clicks. I’m disappointed in myself and the early Facebook team for not thinking more about how the News Feed algorithm could change our culture, influence elections and empower nationalist leaders. And I’m worried that Mark has surrounded himself with a team that reinforces his beliefs instead of challenging them.

In parts, the essay gets Orwell-style chilling. For instance,

The most problematic aspect of Facebook’s power is Mark’s unilateral control over speech. There is no precedent for his ability to monitor, organize and even censor the conversations of two billion people.

The piece runs more than 6,000 words. It’s certainly worth reading in full—but if your attention span has been shattered by, well, Facebook and other social media, the video version of the essay embedded above (which includes some lively animation) runs a mere five minutes and 22 seconds.