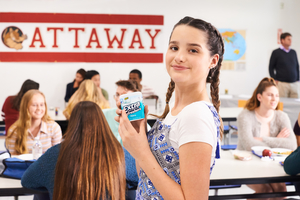 The company, which will produce all advertising content, has already secured a deal with Mars Wrigley Confectionery's Extra Refreshers Gum. The Extra's deal will include in-story integrations in certain shows this summer, and pre-roll ads featuring some of Brat's teen stars. The content will also appear on Brat’s social channels.

YouTube typically makes decisions about which ads run across publisher channels and then splits the ad revenue with them. However, some publishers, including NBC, CBS and Condé Nast, can coordinate their own advertising on YouTube. This now puts Brat amongst an elite group.

“Especially for this demographic, brand safety and control is of the utmost importance," says Fishman. "That's why we’ve invested in production moderation and placements that will allow our brand partners to feel comfortable and assured that their messaging will be responsibly represented."

Brat, which began creating content on YouTube in 2017, streams original web series like “Chicken Girls,” which follows the lives of a group of young dancers and is now on its fourth season. This year it will be releasing a new series, “Red Ruby." On YouTube, Brat had over 11 million viewers in the first three months of 2019 with nearly 750 million minutes of viewing time, the company says.