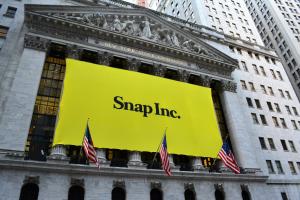 What people are talking about today
Snapchat’s appeal seems to be fading in its core market, the U.S. The social app is expected to lose U.S. users this year, according to a projection by eMarketer, which blames a backlash to a Snapchat redesign and competition from other social networks.

Snapchat watchers may not be surprised. Ad Age's Garett Sloane says it's "no secret Snap has flattened in user growth since it publicly reported in the fourth quarter of 2018 that daily active users dropped by 1 million people year-over-year in North America, to 79 million." The eMarketer forecast came out early this morning, meaning Snapchat hasn’t had a chance to weigh in yet. Sloane says Snapchat would probably want to point out “that it reaches 70 percent of 13- to 34-year-olds in the U.S. every month, a number it thinks compares favorably even to Instagram’s reach in that demographic.”

‘Secret recipe for success’
Instagram’s influencer culture has gotten so over-the-top that brands are poking fun at it now. KFC has reimagined founder Colonel Harland Sanders as a modern-day social media influencer; the computer-generated character has taken over the brand’s Instagram account, looking like a cross between a Hemsworth brother and a young Colonel Sanders, Ad Age’s Jessica Wohl writes. The character has a “Secret Recipe For Success” tattoo on his toned abdomen. And like many real influencers, he fills his posts with humblebragging, inspirational platitudes and glamor shots of himself. One post says: “I may be a restaurant mogul and international inspiration, but I’m still just a kid who loves being in the kitchen. #humble.”

It’s not easy being green
Apparently, when cannabis marketers look for ad agencies, things get complicated.

Kevin George, who runs marketing for Harvest Health and Recreation, tells Ad Age’s E.J. Schultz that he has a hard time getting big agencies to work for him. “No holding company will buy media for me because they won’t work with cannabis companies because it’s federally illegal,” he says. “They would love to work with us. The challenge is their lawyers and their CFOs won’t allow it.”

Read what the holding companies have to say about that, and listen to Schultz’s conversation with George in the Ad Age Marketer’s Brief podcast.

Just briefly:
Face the music: President Trump on Tuesday tweeted out a “Make America Great Again” video with a dark and haunting (and strangely familiar) soundtrack. BuzzFeed News reports that “Warner Bros. Pictures is filing a copyright infringement complaint to have the video taken down because it uses part of the score from the studio's 2012 film ‘The Dark Knight Rises.’”

At the House: "YouTube disabled the commenting function on a livestream of a House Judiciary Committee hearing on hate crimes because the event was generating too many hateful remarks," Variety writes.

At the Senate: “Two U.S. senators introduced a bipartisan bill that would ban ‘manipulative’ design features and prompts that let large websites such as Alphabet Inc.’s Google or Facebook Inc. ‘trick consumers into handing over their personal data,’” Bloomberg News reports.

Interactive storytelling: YouTube is at work on choose-your-own-adventure-style shows -- and if that sounds familiar, it’s because Netflix is doing the same. Read more from Bloomberg News.

Cloudy: Brands like Anheuser-Busch and the NFL use marketing cloud software to understand how consumers engage with their brands. And if you’re confused about how it all works, George P. Slefo’s story in Ad Age explains things.

Headline of the day: “Facebook rolls out more features for dead people,” from Wired. (Basically, Facebook is making some updates to address complaints from users who have lost a friend or family member.)

Creativity pick of the day: Even if you have zero interest in beer or sports, it's worth watching Budweiser’s emotional tribute to retiring NBA star Dwyane Wade. The video is about his acts of kindness and generosity, and it shows us “how much the Miami Heat pro has contributed to the world outside of his 15 years in the game,” Ad Age’s Ann-Christine Diaz writes. The spot is from Vayner Media and Vayner Productions. Be forewarned: It’s a tearjerker.