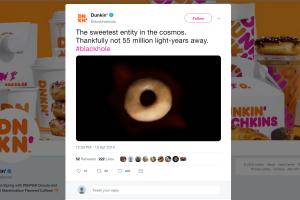 Review sites like Yelp discourage brands from incentivising reviews, but that is exactly what Tide is doing to promote its new laundry service. Find out more below, along with how electronic cigarette marketer Juul is trying to entice military members. But first, a little something from outer space.

Fade to black
It did not take long for newly released visual evidence of black holes to enter the social media branding abyss. The National Science Foundation today released the first-ever picture of the outer space phenomenon, which, as CNN reports, was captured in 2017 using a global network of telescopes. Within hours, brands, predictably, began exploiting the newsmaking discovery with tweets. Below, the real thing, followed by some examples of brands piling on.

Juul aims to hook vets
Makers of the popular electronic cigarette Juul Labs are trying to hook service members. The brand is offering active and former military members its starter kit for $1, which retails between $50 and $60, depending on where you live in the U.S. Juul has a 68 percent market share in the e-cigarette space, according to Truth.com, and its pods – which range in flavor from mango to crème brûlée – carry twice as much nicotine when compared to other products.

Juul’s website recently showed an image of a pilot next to a caption that reads, “Juul Labs honors your service with a special offer only for the U.S. military, veterans and first responders.” The company markets itself as a healthy alternative to cigarettes, yet in 2016, the surgeon general declared e-cigarettes “a major public health concern.” The promotion is being offered through ID.me, a service where brands offer verified veterans special deals.

Boxing out
The WNBA has a new look. The women’s pro hoops league this week released a new logo ahead of the May 24 season opener. Design consultancy Sylvain Labs handled the overhaul. The biggest news is that the image of the player is freed from the box it used to be in, which the league says sets it apart from other NBA properties. “The NBA logo, there’s a rectangle around him, he’s in a box. Same with the G-League logo and the previous W-logo. She had a box around her,” WNBA chief operating officer Christy Hedgpeth said in a press release. “The box is going away. It’s powerful, it’s freeing and it’s expansive.”

The league made other news this week, striking a deal with AT&T to make the carrier-content provider the first non-apparel partner to have its logo featured on all 12 team jerseys throughout the league. AT&T will also feature its logo throughout WNBA properties, including those that exist elsewhere, such as ESPN.

Below, see the WNBA's new logo, above the old one.

Adidas gets more play
On the heels of its blockbuster partnership with Beyoncé last week, Adidas is back at it. The sportswear giant announced this week that it is teaming up with the Premier Lacrosse League in a multi-year partnership as the group’s official sports brand. Adidas will design all on-field apparel for players. To promote the deal, the brand is hosting activation events throughout the lacrosse season. It will also host PLL pop-up events at flagship stores in California.

Rodarte extends its offerings
High-end fashion has long been criticized for its lack of inclusivity—in models, in sizes, in ages. However, change is on the horizon as brands react to consumer demand by incorporating more diversity into their marketing and merchandise. To that end, fashion house Rodarte announced this week it is collaborating with Universal Standard, a womenswear brand known for its size-inclusive offerings, on a ready-to-wear collection available in size 00 to 40. The pieces will retail for $150 to $240. Universal Standard partnered with J. Crew on a collection last year.

Trolli’s new creatures
Trolli has a series of new spots in what the Ferrara Candy Co. brand says is its largest media investment to date. The “It’s Trolli” campaign from Wieden & Kennedy suggests gummi worms and other sweets come from a fantasy world filled with creatures where the candy leads to happiness and plenty of neon. The agency worked with Becky Sloan and Joseph Pelling, and animation specialists Blinkink, to come up with the mini worlds in the spots.

Review Tide Cleaners, get $5 off
Tide Cleaners, which recently began a national rollout of its laundry service, would like customers to review it so much that it’s offering a $5 discount if they do. A Procter & Gamble Co. spokeswoman says, “Our team works hard to make sure people have a positive experience with Tide Cleaners, but participating consumers received the discount regardless of the review content.” So the brand isn’t just buying positive reviews. Trouble is, review sites like Yelp, where the reviews were directed, frown on providing incentives for reviews of any kind.

Hello Welly
Eric Ryan, who’s helped launch such brands as Method home and personal care and Olly vitamins, is taking on a new aisle – first aid. Welly, his new brand, takes on mainly Johnson & Johnson’s Band-Aid alongside a host of smaller players, with premium bandages, first-aid tools and ointments “designed to turn everyday bandages into badges of honor.” The brand features the design savvy that’s been a hallmark of Ryan’s prior brands along with playful, recyclable packaging geared toward millennial and Gen X consumers.

Would you buy this?
Unilever’s Schmidt’s Naturals is getting into hemp with a line-up of hemp-oil deodorants coming in September, to be followed by a separate range of CBD products – assuming regulations for the latter have been clarified by then, MarketWatch reports. The CBD-infused products are antibacterial to help fight odor, plus soothing to prevent irritation.

Number of the week
$31,990: The amount raised to date to launch a new snack. Quevos are chips made from egg whites that hit two current trends: They are high in protein and low in carbs. The creators asked for $10,000 on Kickstarter and have far exceeded the goal. Taste? Still TBD. The product is expected to ship to funders in June.

Comings and goings
Cardlytics, which describes itself as a “a purchase intelligence platform,” installed Pandora’s Chief Marketing Officer, Aimée Lapic, to its board of directors.