More than 15 million people follow Spotify’s ‘Global Top 50’ music chart, making it an important discovery channel on the service. Now it’s looking to do the same thing for podcasts, albeit locally.

This afternoon, Spotify is launching podcast charts in 26 countries, including the US and UK. The format mirrors its music rankings: the podcast equivalents of the ‘Top 50’ and ‘Viral 50’ charts will be ‘Top Podcasts’ and ‘Trending Podcasts’.

In seven countries – the US, UK, Brazil, Germany, Australia, Mexico and Sweden – there will be sub-charts devoted to individual podcast genres like true crime, comedy, news and politics, etc.

At launch, the charts will be available within Spotify’s iOS and Android apps, within the podcasts section of the search/browse screen. According to the screenshots, both the main charts will be updated on a daily basis. Unlike the music charts, they will not include figures for how many streams podcasts have had.

Podcasters will also get notifications in the Spotify for Podcasters analytics dashboard when they’re charting. For listeners, the new charts sit alongside Spotify’s algo-personalised playlists like Your Daily Podcasts, Your Daily Drive and Your Daily Wellness as a way to surface shows. 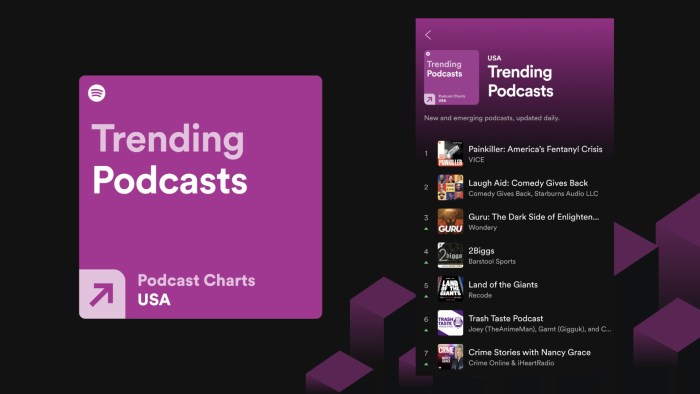 The launch isn’t just about offering a new discovery feature for Spotify’s podcast listeners – of whom there were nearly 55 million at the end of March, according to its last financial results. That’s 19% of its total monthly active users, a percentage that the new charts could help to grow.

No, today’s news is also opening up a new front in Spotify’s longstanding rivalry with Apple, which has long been the main authority when it comes to popularity rankings within the podcasts industry, initially with iTunes and now through its Apple Podcasts platform.

Now Spotify will have its own rankings to compete with Apple’s, with the benefit of being able to include the shows that are exclusive to its own platform. That, in turn, sparks some interesting questions about the extent to which Spotify’s charts will reflect not just pure, organic popularity, but also its promotional efforts for its own shows.

The other podcast charts competition that has emerged in recent times comes from a company called Chartable, which in March 2020 launched a weekly global chart, a trending chart, and rankings focused on specific genres and countries. It also tracks podcast rankings on four individual platforms: Apple, Spotify, Google Podcasts and Stitcher.

Spotify’s charts will sit alongside these as a data source to understand which shows are popular around the world. The company is using one of the tactics from its music operations to promote the new feature: shareable ‘cards’ for social networks that podcasters can use to boast about their Spotify rankings.