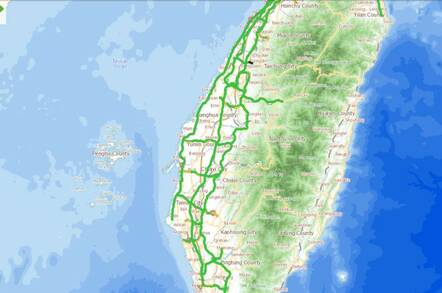 Taiwan has floated the idea of adapting its traffic-monitoring app into a “don’t-go-there-you-won’t-be-able-to-social-distance-app”.

The app is called “Freeway 1968” and its primary purpose is offering advice about traffic congestion.

But the Taiwanese government wants to adapt it for other purposes after striking problems over the weekend of April 4th when it proved difficult to practice social distancing on Tomb Sweeping Day, a festival at which families visit the graves of their ancestors to pay respects.

“The government decided a new method was needed to remind people to observe social distancing rules and other restrictions after the number of text messages it sent over the Tomb Sweeping Day long weekend angered travelers as well as hoteliers,” said a statement from Taiwan’s Parliament.

Vice Premier Chen Chi-mai therefore floated the idea of upgrading Freeway 1968 to “monitor the flow of traffic and people into scenic areas and determine if additional travel warnings are needed”.

Taiwan’s statement says Department of Cyber Security Director-General Howard Jyan envisages: “A new function would be added to enable the app to conduct big data analysis and issue alerts when there are large numbers of travellers headed to specific travel destinations.”

“The alerts would be graded by color from green to yellow to red, with red meaning that scenic areas are too crowded,” the statement says, adding that individual privacy will be preserved.

Testing of the app, and the public’s response to it, is under way with a view to having it ready for Taiwan’s May Day long weekend.

The Freeway 1968 app is unrelated to Taiwan's COVID-19-contact-tracing app. ®