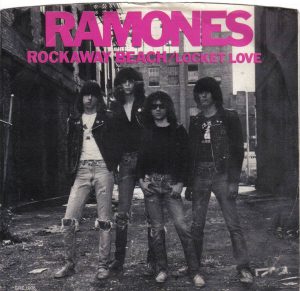 Well, where do you even start with Rocket to Russia?

As their third album in 18 months, and their final album with Tommy in the drummer’s throne, Rocket to Russia is a quantum leap ahead of Leave Home, and is pretty much acknowledged as the peak of their art, and one of the greatest albums in rock and roll history. And one of the peaks is the highest-charting U.S. pop single they ever did, “Rockaway Beach.”

Chewing out a rhythm on my bubble gum
The sun is out and I want some
It’s not hard, not far to reach
We can hitch a ride to Rockaway Beach
Up on the roof, out on the street
Down in the playground the hot concrete
Bus ride is too slow
They blast out the disco on the radio

The Ramones pull out all of the stops on “Rockaway Beach:” great harmonies, ooooooooohs in the backing vocals, a full stop after which Tommy kicks the song back into gear. And of course the utterly irresistible chorus:

“Rockaway Beach” was released as a single in the U.S., and I have a vague memory of hearing it once on the radio maybe? In any event, the Ramones were never ever big singles artists, even in the U.K. — which, I know seems insane on ever level, given the high quality of their singles — and so “Rockaway Beach” peaked at #66 on the Billboard pop charts, the best performance (outside of some Modern Rock Chart love in the late 80s) they ever did. No wonder they got bitter.

This is where I came in.

It was late summer, 1978, and I was 15 aching to be 16. I’d been reading about the Ramones and punk rock and all of it for about a year in Creem (who were all in) and Rolling Stone (not as much), but hadn’t yet pulled the trigger on, you know, actually buying any punk records. Seemed scary. But my total and complete love for The Cars, especially side two — the greatest achievement in Western Civilization — convinced me to take a chance.

So one day, I got on my bike, rode to Tower Records, and bought Rocket to Russia and Marquee Moon, two records that I was led to believe — I hadn’t heard a note of either record — were punk rock, but at the same time were wildly different from each other.

I don’t remember which one I heard first, but I’m pretty positive that the first Ramones song I truly loved was “Rockaway Beach,” even though I’m pretty sure I had no idea that it was a real place, but rather a fictional beach where they just used “rockaway” instead of “rock’n’roll.” And while I was suspicious of a record that didn’t have any guitar solos — unlike, say, Marquee Moon — it turned out that they didn’t need any guitar solos. Which was the weirdest thing ever, but OK.