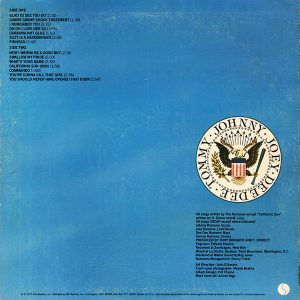 On their first album, the Ramones chanted how they wanted to sniff some glue (which I’ll discuss more when I get to the utterly ferocious It’s Alive! version), but as it turns out, sniffing glue wasn’t nearly enough. In fact, there was a whole array of household products to ingest! That is, unless mommy and daddy intervene.

And over a supercharged surf riff, Joey explains his dilemma.

Wondering what I’m doing tonight
I’ve been in the closet and I feel alright
Ran out of Carbona, Mom threw out the glue
Ran out of paint and roach spray too

It’s TV’s fault why I am this way
Mom and pop wanna put me away
From the early morning movie to the late, late show
After it’s over, nowhere to go

This leads into one of longest, catchiest choruses in all of Ramones land, an absolute hookfest of epic proportions.

Joey’s vocal on the elongated “dooooooooooooooooo” are an absolute thing of beauty, and of course immediately after the chorus, they toss in a bridge where everybody screams “hey”, thereby passing the legal limit of the number of hooks any band is allowed to have on a single song, so naturally after the bridge, it’s second verse, same as first.

Then at the end, they combine the end of the chorus with the bridge, so the whole world could sing:

One thing is certain: “Carbona Not Glue” is the greatest song ever written about the joys of huffing things other than glue.

There was one small problem with “Carbona Not Glue:” while the Ramones were clever enough to write this song, they weren’t clever enough to realize that Carbona was a trademarked product. To be fair, neither did Sire, who released the song — which the Ramones wanted as a single — on Leave Home, only to almost instantly remove it.

While in the U.K. they replaced it with “Babysitter,” in the U.S. they replaced it with the single version of Future Certain Song “Sheena is a Punk Rocker,” and that’s the version of Leave Home I purchased in either late 1978 or early 1979 — after Rocket to Russia and Road to Ruin — meaning that I didn’t hear this spectacular song until the 2001 Rhino reissue of Leave Home.

Which I know was 20 years ago now, but in my mind I’ve been listening to this song as part of Leave Home pretty much forever.