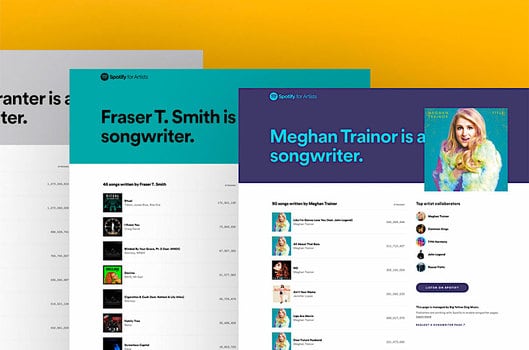 After losing favor among songwriters for appealing a royalty rate increase, Spotify is attempting to get back in artist’s good books by debuting the Songwriter Pages feature, which allows bands and artists to have their own dedicated page on the platform.

There’s been a lot of bad blood between songwriters and publishers after the streaming service appealed a royalty rate increase by the Copyright Royalty Board (CRB) last year. In fairness, Apple Music was the only service that agreed to the increase while all of the other major streamers appealed, which didn’t exactly endear any of the them to the songwriting community. Now it appears that Spotify is trying to mend the fences somewhat by launching a new dedicated Songwriter Pages feature where a songwriter is able to have his or her own page on the platform.

Spotify actually began displaying songwriter credits in 2018, but a dedicated songwriter page is certainly a step up in terms of exposure. It’s now only in beta, but has launched with songwriter pages for Meghan Trainor, Fraser T Smith, Missy Elliott, Teddy Geiger, Ben Billions and Justin Tranter, among many others.

The way it works is when songwriters are credited on a track, listeners are able to then click on their names to view a page that shows the songs they’ve written as well as their artist collaborators. Each songwriter page will also feature a new Written By playlist of their songs, which can also be discovered via Spotify’s search bar. Songwriters are also able to share a link to their pages on social media or a website if they want.

That’s all well and good, and I’m sure songwriters are grateful for the exposure. It’s something that’s definitely needed. But I bet if given the choice between more exposure and more money you can guess which one would win.

It’s possible that songwriters can eventually get that raise as the CRB hasn’t ruled on the appeals yet. In the meantime, this is a step in the right direction.

If you’re a songwriter that wants to be part of the beta, you can sign up here.