Every Possible Melody Has Been Copyrighted, Stored On A Single Hard Drive | Hypebot 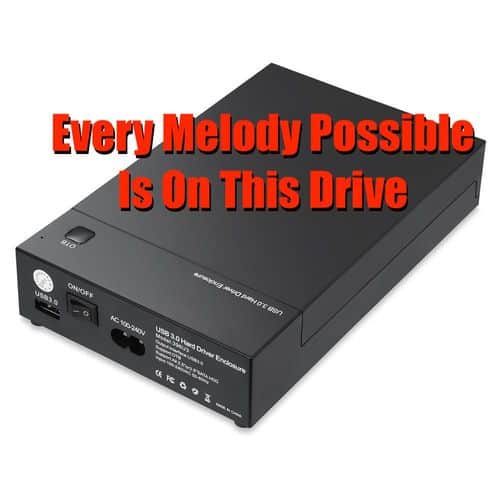 Every Possible Melody Has Been Copyrighted, Stored On A Single Hard Drive

In a unique effort to combat the high volume of dubious lawsuits flying back and forth in the music industry today, on team of musicians has recorded every possible melody onto a single hard drive, and then put each melody in the public domain.

Songwriters are super cautious these days since plagiarism lawsuits are flying and the winner in court is usually the one you’d least suspect. One of the reasons why it’s so tough to defend a copyright lawsuit is because the court now considers a melody just a sequence of pitches, so Damien Riehl and Noah Rubin developed a program that recorded every possible melody (all 68.7 billion of them) via MIDI to a hard drive, but not for the reasons that you might think.

Damien Riehl is unique in that he’s a musician, a programmer and an attorney who understands how copyright works. His idea was to commit this vast library of melodies to a hard drive (along with programmer friend and musician Noah Rubin), which automatically bestows copyright on all them when as soon as they’ve on a medium.

This might initially seem sinister but the two then put the melodies into the public domain. In fact anyone can download the works and the program the two used in order to take the process further at allthemusic.info.

By doing this the duo hope to actually put an end to what many consider frivolous copyright lawsuits like the Katy Perry “Dark Horse” or Robin Thicke “Blurred Lines” cases. In just about all infringement cases, a jury rules against a songwriter if it’s possible the he or she had access to a previous work somehow. That means that a songwriter might accidentally copy a song that they’ve heard and forgotten about, or even write it independently without ever hearing it, yet still be liable for plagiarism.

Riehl and Rubin used the same brute force method to discover the 68 billion melodies that code breakers use to uncover a security code. They covered just a single octave, which is what most pop songs use. Rhythms were not considered because they are not legally applicable. It’s been estimated that it would take a songwriter 248 years to exhaust the possibilities manually.

What’s more, there are only 243 combinations of a sequence of 3 notes up and down and 5 notes wide that most pop songs fall into. As you can see, it’s extremely easy to copy another song without even knowing it.

Being a part of a lawsuit for copyright infringement is no trivial matter, in that it costs up to $2 million whether you win or not. Riehl and Rubin are trying to bring some reason back into the process by saying that all songs have already been copyrighted and in the public domain, so songwriters can rest easy knowing that they won’t be sued in future for infringing on something already in the public domain. It’s now up to a court to decide if that’s the case or not.

Check out Damien Riehl’s Ted-X talk about the process below.