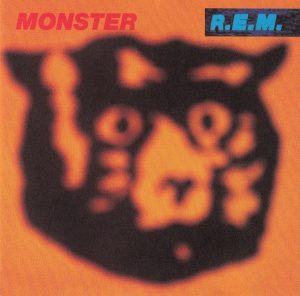 So, as you might have remembered, in early April of 1994, Nirvana frontman Kurt Cobain blew his brains out with a shotgun, the biggest shock not being that he died — he’d already overdosed a few weeks previously — but how he died. Of course, I’ve already been over this territory before, so let’s focus on how that death affected R.E.M. Spoiler Alert: a lot!

At that point, R.E.M. was in the middle of making Monster, and given the mutual appreciation society that had sprung up between Kurt and Michael Stipe — Cobain was on record admiring how well R.E.M. took their stardom and Automatic For The People was found in his CD changer — Cobain’s death did a number on them.

Yeah, all those stars drip down like butter
And promises are sweet
We hold out our pans with our hands to catch them
We eat them up, drink them up, up, up, up

And so with Mike Mills kicking up a hailstorm of noise on one of Kurt’s guitars (courtesy of Courtney Love) — which he had to re-string to play right-handed — Stipe sang lyrics that he described as a “phone call” to Kurt, trying to get him out of the state he was in.

As we all know, when you’re dealing with addicts, sometimes that shit works, sometimes it doesn’t. Sometimes they can’t see their way out into the light. For Stipe, it was even more frustrating, because they were going to work on songs together, and at the last second Kurt backed out. And, then, well, you know.

I only wish that I could hear you whisper down
Mister fisher moved to a less peculiar ground
He gathered up his loved ones and he brought them all around
To say goodbye, nice try

At some point in the proceedings, an organ — played by non-organist Peter Buck — tries to cut through the murk, and Bill Berry plays a tambourine, but everything is beaten down by the existential despair kicked up by the guitar and vocals. And on the second chorus, Stipe appends a couple “yeah, yeah, yeah” a reference to the inside joke he deployed so effectively in “Man on the Moon.”

I had a mind to try to stop you
Let me in, let me in
And I’ve got tar on my feet and I can’t see all the birds
Look down and laugh at me, clumsy, crawling out of my skin

After that verse, the first “heeyyyyyyy” on the chorus is more like crying than it is singing, though Stipe almost instantly recovers, it’s clear that unlike so many of the songs on Monster where he was playing a character, this one was utterly real, utterly from the heart, and utterly fucked up. Which is probably why I’ve always loved it.

Interestingly, when the remixed Monster 25th anniversary edition came out last year, the remix of “Let Me In,” which featured a clearer vocal and no organ at all, was one of the featured tracks. And while I like many of the remixes better than the originals (more on that next), I preferred the original, murky-as-fuck version.