It’s been a comfortable year for the major record companies – but alarm bells may be starting to ring in the distance.

Meanwhile, the majors face a rampant threat from well-funded, new school operators – many of whom have nine-figure funds from private equity and venture capital backers in their wallets. These companies, including Merck Mercuriadis’ Hipgnosis Songs Fund and Scooter Braun’s Ithaca Holdings, plus the likes of Primary Wave, Reservoir and Round Hill, are paying big money to acquire classic songs/recordings made famous by Taylor Swift, Elvis Presley, Whitney Houston, Ed Sheeran and many more. They are outbidding major labels to win these assets –  which explains why there’s potential tension between Ithaca and Universal (the former bought Taylor Swift’s masters; the latter did not), and why Warner Music Group is now helping spend $650 million of Providence Equity Partners’ money, rather than its own cash, on copyrights.

Despite these menacing forces in the major label world, the investment community at large remains steadfast in its positivity about music’s future; Goldman Sachs, for one, thinks there will be more than a billion paying music streaming subscribers in the world by 2030.

Podcasts really matter to Spotify. The company has spent over $400 million on acquiring podcast content and distribution companies in the past 12 months.

The primary reason SPOT loves talk-content so much is financial; Spotify founder Daniel Ek let slip on an earnings call in February that Spotify believes podcasts can help it “shift [our] cost base from variable to fixed.” In less investor-y speak, that simply means: When people play music on our service, we have to pay out royalties; when people play podcasts on our service, we do not. So the more that people play podcasts instead of music, the more money we’ll ultimately retain.

Ek dropped a stat in that same Q4 earnings call in February that will echo through the ages for record companies: “We believe that, over time, more than 20% of all listening on Spotify will be non-music content, and we strongly believe that this opportunity starts with podcasts.”

Ten months on, that “opportunity” is rapidly maturing – and eating into the bread and butter of record labels.

NPR published a fascinating report last month, based on Edison Research’s serialized Share Of Ear survey. The results haven’t been granted half enough of the attention they deserve in music biz circles.

More than 4,000 US citizens, all over the age of 13, were quizzed on the way they consume audio content today. It was discovered that, on average, Americans now listen to an average of four hours of audio content each day, across radio, music, podcasts and audiobooks.

The killer stat? In 2014, 80% of the US population’s listening hours were directed towards music, with 20% dedicated to spoken word; in 2019, with the mainstream presence of podcasts erupting all around (not least on Spotify), these stats have changed: music’s share is down to 76%, says the research, with spoken word growing to 24%. This represents a 5% market share decrease for music (from the 2014 percentage figure to the 2019 equivalent), and a 20% gain for spoken word.

To put that into context, let’s say a teenager spends four hours a day listening to audio content; in 2014, they would have spent over 3.5 hours of that time consuming music; yet five years on, in 2019, this number has fallen by 17 minutes per day, by two hours every week, or by over 100 hours every year. 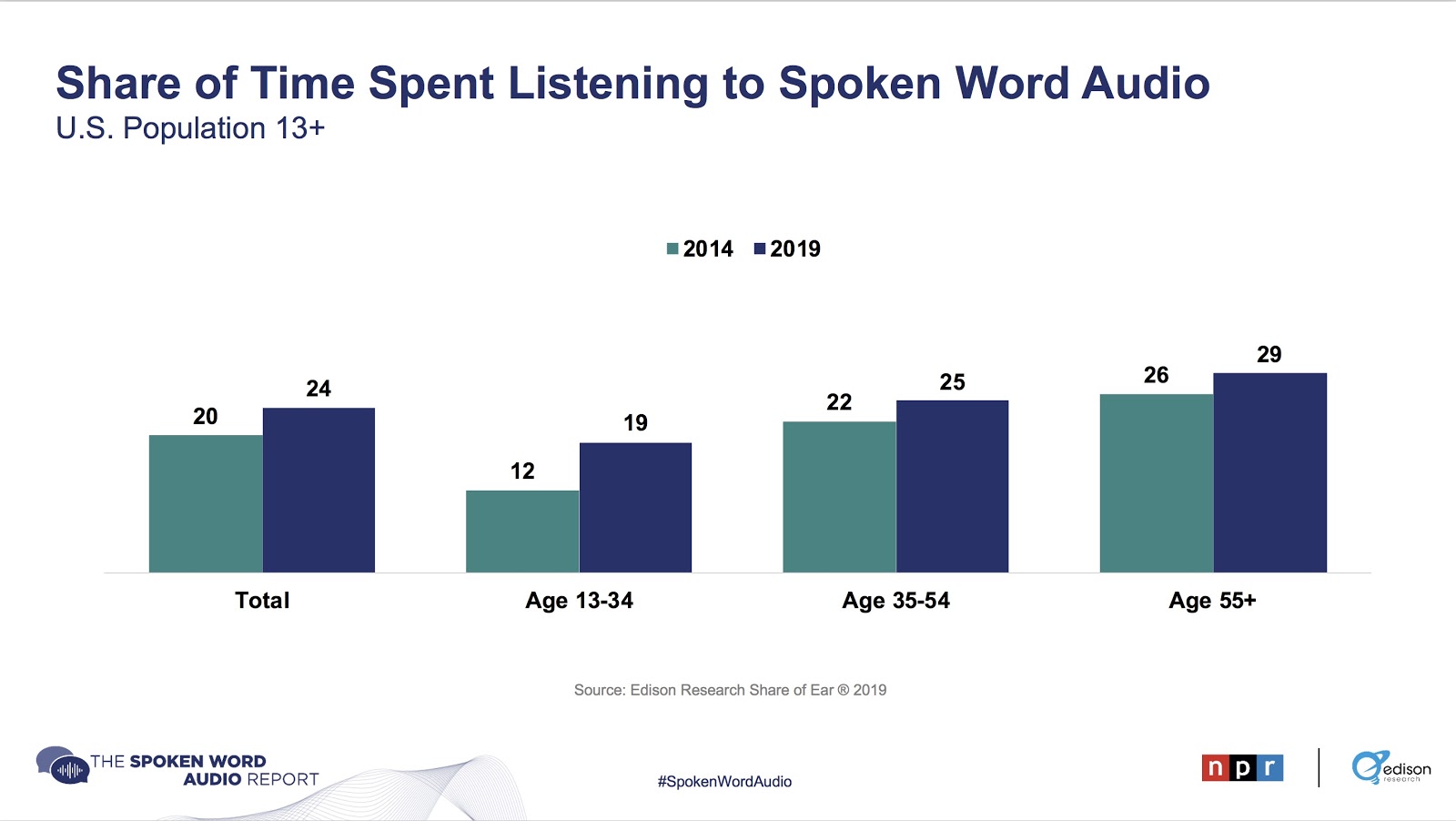 Other evidence is also emerging to suggest the music business has reason to fear the growth of podcasts.

IFPI, the global trade body for the recorded music industry – and therefore an organization that typically wants to show the record biz at its very strongest – released its own report, Music Listening 2019, earlier this year, based on a survey of 34,000 internet users worldwide. It proudly boasted that the average music fan now spends 18 hours a week listening to tunes, up from 17.8 hours in the prior year. In reality, though, that figure had only climbed by less than two minutes per day – literally, a shorter time than most songs – versus 2018, against a wider backdrop of increasing audio media consumption.

Meanwhile, according to Nielsen data published in September, the average time that self-proclaimed music fans in the U.S say they spend listening to music each week has actually fallen, from 32.1 hours in 2017 to 26.9 hours in 2019.

Over at Spotify, none of this is causing concern. The platform was delighted to tell its investors that in Q3 (the three months to end of September), total podcasting listening hours on its platform were up by 39% quarter-on-quarter, with the format being consumed by 14% of Spotify’s 248 million Monthly Active Users [MAUs] – or approximately 35 million people.

According to Daniel Ek, on average, a music track is a “three-minute time commitment,” while a podcast is an “hour’s time commitment.” Presuming that those 35 million people only listened to one podcast each in Q3 (and saw this “commitment” through to the end), that would mean that podcasts on Spotify were being listened to (obviously) for 35 million separate hours in the quarter; if those hours were filled with music consumption instead of podcast consumption, they would have resulted in 700 million plays of three-minute songs.

Assuming that Spotify’s average blended recorded music per-play royalty payout sits somewhere around $0.0044, those potentially “lost” 700 million plays would be worth some $3 million dollars to record labels, or $1 million per month.

You can expect such statistics – clearly troubling for record companies and their artists – to continue to escalate. Daniel Ek said to Spotify investors in October: “We’re now at 14% of our MAUs using [podcasts]. We still want that number to grow and we’re still primarily focused on that, given all the good news [podcast consumption] leads to in the overall platform.”

Whether or not you see podcasts’ cannibalizing of music consumption on Spotify as “good news,” or something rather scarier, will depend on whether you’re a Spotify investor, a record label, or a musician.

The paradox at the heart of this story: What happens when the world’s leading music streaming service becomes economically incentivized to encourage its customers to actually listen to less music?

A version of the above article originally appeared on RollingStone.com through this link.