Why We’re a Duo | Spotify for Artists 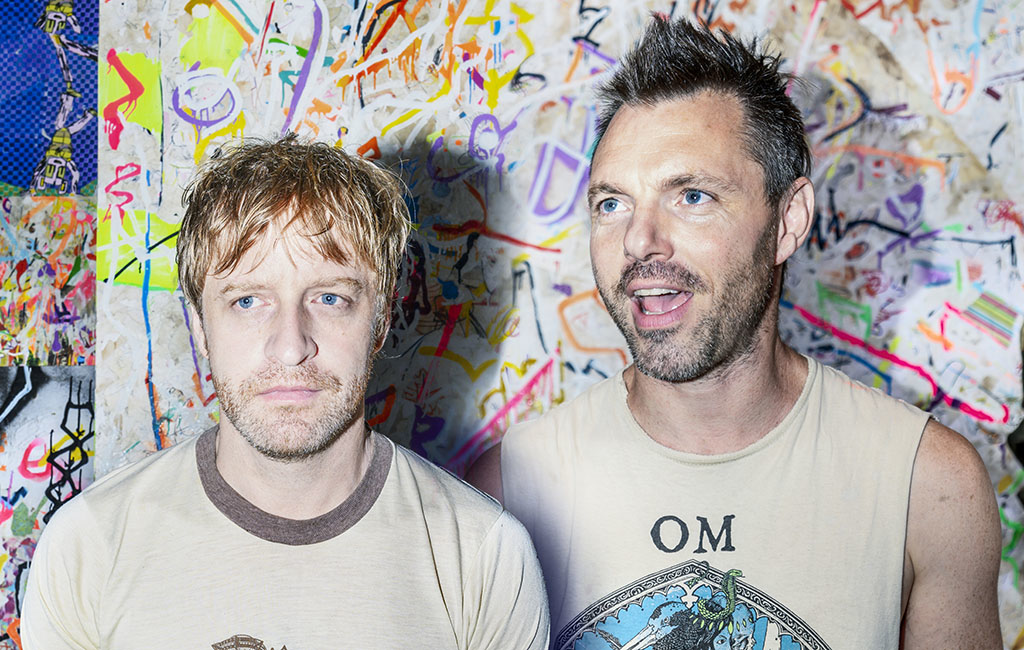 Lightning Bolt's Brian Chippendale says being a twosome for more than two decades has many upsides.

Though they have the punishing volume of a much larger ensemble, veteran noise-punk band Lightning Bolt have remained a duo for more than 20 years. Over the span of seven albums, bassist Brian Gibson and drummer/vocalist Brian Chippendale have perfected a singular bombardment, a band that sounds like a hovercraft duetting with fireworks. Their colorful style, joyously distorted sound, visceral rhythms, and minimal setup have influenced tons of bands over the years. Their latest LP, Sonic Citadel, is another stepping-stone, this time toward giddier, more melodic shores. We talked to Chippendale about the advantages and challenges of being one of rock's most enduring two-person operations.

Spotify for Artists: You guys were a trio for about two years in the '90s, right?

Brian Chippendale: Well, we started as a duo. We played a show in 1994 in an art-school cafe at our school, Rhode Island School of Design, and we played as a duo. And then for maybe two years... we had Hisham Bharoocha, who went on to do Black Dice and Soft Circle. He was our singer.

Why did you decide to continue as a duo?

What's the biggest advantage of being a duo?

When you make a hundred bucks, you get fifty bucks each. In a band, when the going gets tough, money has a big impact. And it's sad and annoying and it sucks. We would tour with bands with three or four or five people, and see the money just go so much further for us. Plus we could fit in a smaller car. We used to fit in a minivan. So, it'd be like two people in a minivan with better gas mileage, making more money per member, then the better-known band with four people in a van. So in the beginning when stuff was really tight and times were tough or whatever, the bonus of two people was really big for touring.

What about the biggest challenge?

I would say the biggest challenge is the opposite—if you're not on the same page. A two-person vote can be really paralyzing. "I like this song." "I don't like this song." The negative wins. "I want to play that show." "I don't want to play that show." Like, OK, we're not going to play the show, we're not going to use the song. An odd-number band is probably pretty handy 'cause you can break the ties, which is pretty cool.

I mean, we've been [a band] for 25 years. That's probably longer than [the] statistics for marriages and stuff. As a two-piece, which is basically like a relationship, a very monogamous relationship, we're doing pretty good! And it is, kinda, 'cause at this point, we do agree on a lot of stuff. We always fight over song order on records. That's another one that gets kind of touchy.

What about the songwriting process itself?

It's actually changed over the course of our relationship. I think in the beginning, we sort of had a passive-aggressive relationship. Like I was kind of a dick and he was kind of chill. So I might like bludgeon things into existence and then he would sort of subtly work on them. I would shoot down a lot of stuff. I'd be like, "That bassline sucks, fuck that shit!"

But I think now we're mellower, and so we don't battle over stuff as much anymore. And I don't know if it's for the better. I actually think having some sort of friction in the band is kind of good. It's like you get married and it's really fiery and it's awesome, and then after a while you just kind of learn to work together and you become a pragmatic team. I wonder if that's reflected in the music. I think it probably is a little bit. We're more agreeable and so thus our music is more agreeable a little bit. Which is why everyone likes our new record.

I think what's been another positive about it is we can literally [each] just play our own fucking song. And as long as we play them simultaneously, it's music because it's two simple things overlapping. You know, it's like when you get more and more people, then you have this chaotic, big, free-jazz band. We can be both super-alpha dog in our playing and it can still work. Nobody compromises virtually at all and then it's fine. And that's sort of what's been part of our schtick is, "I'm going to do whatever I want all the time and I'm not going to sit back for the guitar solo or whatever." And it just kind of works 'cause with two people, it doesn't become utter chaos.

Do you have any advice for duos?