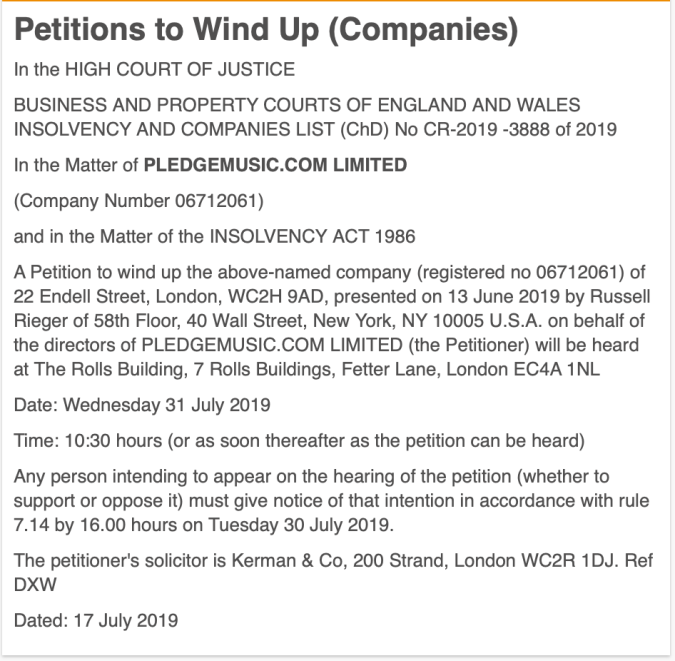 It appears that PledgeMusic has not planned on going into administration (like reorganization bankruptcy), at least not since June 13, 2019.  Therefore, any statements the company or its representatives have made since that date must be looked at anew.

Because the company had guided all of its potential creditors toward administration, everyone was looking the wrong direction.  I only discovered this petition today by searching The Gazette, which is the official paper of record of the UK government and is used pretty much exclusively for legal notices.

I had not done so previously because I assumed, like everyone else, that Pledge was going into administration.  Because that was what they said they were doing.

But–something in the far recesses said, “Did you check The Gazette?”  “No.  Why would I, they are going into administration.”  Long pause.  “And how do you know that exactly?”  “They…said..so.”  “Well, smart boy, what if they…you know…lied.”  “Guess I better check.”  “Guess you better.”

And sure enough, there it was.

The company had been clearly guiding us to believe they were going into administration which would have given artists, fans and vendors at least a chance to be heard on the rather bizarre behavior by the company’s board and officers.  For example, Benji Rogers said that directly in a widely read Medium post under the apparent authority of the company (if you can just cut through the sanctimony):

But a couple days ago Pledge took the pledgemusic.com site down (why is much clearer now) and posted this absurd message:

And you certainly couldn’t be blamed for not realizing that “the most appropriate next steps” meant “we already filed for liquidation weeks ago suckers!”