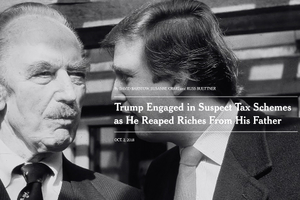 The New York Times' hard-hitting press freedom campaign, “The Truth is Worth It" has taken top honors at the The One Club for Creativity’s Art Directors Club 98th Annual Awards.

The campaign won the ADC's Black Cube for Best of Show as well as honors in both Advertising and Motion/Film Craft. Creative agency Droga5 New York, edit company Final Cut and production company Furlined Santa Monica were among the shops awarded for the work, seen below. Furlined was also awarded Production Company of the Year.

The ADC awards celebrates the best in craftsmanship, design and innovation in advertising, interactive, photography, illustration and more.

In the era of fake news, several other campaigns highlighting quality journalism and press freedom were also notably awarded. TBWA/Chiat/Day New York won two awards, for Publication Design and Typography, for the “The Fake News Stand” on behalf of Columbia Journalism Review, as well as the Packaging Design award for “Unboxing the Truth” for Thomson Reuters. Meanwhile Sweden’s Akestam Holst, which was awarded Boutique Agency of the Year, won the best interactive campaign for “Billboards Beyond Borders,” for Reporters without Borders.

TBWA was the most decorated agency network at the awards. As well as the wins for its New York agency, its Japanese agency TBWA\Hakuhodo Tokyo was named Agency of the Year after winning the most ADC Gold Cubes this year. It picked up eight awards for its “Pride Jersey” on behalf of AIG (which won Client of the Year). Meanwhile, TBWA/Media Arts Lab together with OMD Worldwide Los Angeles garnered six gold cubes, all for Apple’s Spike Jonze-directed spot “Welcome Home."

DDB Chicago’s Super Bowl campaign for Skittles, "Broadway the Rainbow," above, took the top prize for an Integrated campaign, while the ADC Designism Award, for work that best promotes social good, went to McCann New York for “Planet or Plastic” on behalf of National Geographic. Other significant winners included German agency Serviceplan Munich with four ADC Gold Cubes, all for Dot Incorporation “Dot Mini: The First Smart Media Device for the Visually Impaired."

A full list of the winners can be found here.