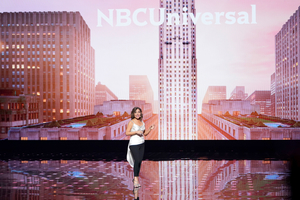 NBC Universal’s upfronts presentation on Monday morning epitomized the delicate limbo in which traditional TV broadcasters find themselves. While the peacock celebrated hits like “This Is Us” and “Keeping Up With the Kardashians,” it also nodded to a very near future when much of its content will likely be watched in a drastically different way than it is now.

In the nearly two-hour stage show, which included performances by Latin star Luis Fonsi and “The Voice” judges, Kelly Clarkson, John Legend, Blake Shelton and Adam Levine, NBC both honored the traditional broadcasting model while preparing for a future when much of its content will be watching outside of the cable footprint.

“Other companies are pushing advertisers out, NBC Universal is bringing advertisers in,” she said. While she didn’t reveal specifics about the service, which is set to debut in mid-2020, there’s at least one series, it seems, that will be available on the platform—“The Office.”

“The shows people love the most and stream the most are coming home,” Yaccarino said. Just last week Nielsen revealed “The Office” is one of the most-watched series on Netflix. (She also name-dropped Jim and Pam, two of the lead characters on the show, later in her speech.)

But as much as things change, NBCU retained a similar format for its presentation at Radio City Music Hall compared to years prior (although instead of going through the programming slate of each of its cable networks, NBC spent time looking at content categories like comedy and reality, while only briefly touching upon networks like USA and Syfy).

Seth Meyers was once again on hand to crack some jokes about his network home and the TV industry as a whole. He poked fun at the industry term OTT, which stands for over-the-top, saying that by 2022 it will stand for “oh that thing.”

As for the name of NBCU’s platform, Meyers suggested calling it “NBC Plus,” alluding to the name of Walt Disney’s streaming service, or “NBC Gold.” “We are not going to go with some crazy name like ‘Apollo Sword’ or ‘Hulu.’”

Meyers also recommended not naming the service after parent Comcast. “No one’s had to wait four hours for the NBC guy to show up,” he said.

And it was Yaccarino who gave both the opening and closing remarks, despite late last year passing the so-called baton of the day-to-day sales operations (and upfront negotiations) over to Mark Marshall and Laura Molen (the two only appeared briefly on stage).

Yaccarino’s message was similar to that of other years, she touted NBCU’s brand safety and the need for a new currency beyond the traditional gross ratings points the industry has traded on for decades.