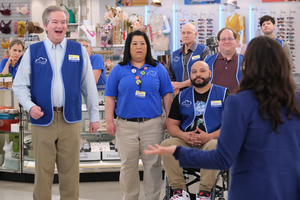 NBC is doubling down on comedy for the 2019-2020 season as it prepares for its streaming future.

“The NBC comedy is literally the heart of our future,” says Paul Telegdy, co-chairman of NBC Entertainment.

While NBC has not provided details on its streaming platform, slated to debut next year, George Cheeks, co-chairman of NBC Entertainment, says they are programming the linear channel as a starting point for how people will watch its shows “for years to come.”

With shows like “Friends” and “The Office,” which originally aired on NBC, as some of the most-watched content on Netflix, NBC looked for comedies that are broad, relatable and can appeal to everyone, Cheeks says.

The network is also being more flexible as it relates to the length of episodes to work with creators who have been wooed by the freedom offered by platforms like Netflix. Cheeks says they have been questioning some of the traditional greenlighting and schedule methodology.

Currently, Cheeks says that its studios are focused on not only programming the linear channel, but also its over-the-top service, and that it has been a collaborative enterprise.

Even with this being the first upfront for the peacock with Telegdy and Cheeks leading NBC Entertainment, after the two replaced Bob Greenblatt in September, the emphasis continues to be on the network.

“We are making a lot of decisions from a vantage point of stability,” Cheeks says. “While our network may be stable, our industry is most definitely not.”

NBC has a very slight lead in the 18-49 demo when accounting for live-plus-seven-day viewership. Excluding live-plus-seven-day, NBC is on track to end the season tied with CBS and Fox, averaging a 1.2 rating in the all-important demo.

“This is Us” is getting three more seasons, which will take it through season six. There has been no decision made if the tear-jerker drama will end at that point.

“The Voice” will continue to air on Monday nights with Kelly Clarkson, John Legend, Adam Levine and Blake Shelton serving as judges. It will serve as a lead-in to NBC’s new family legal drama, “Bluff City Law,” starring Jimmy Smits. “Manifest” will return in the timeslot mid-season.

NBC’s Tuesday lineup remains unchanged, with “The Voice” results show kicking off the night followed by “This is Us” at 9 p.m. and “New Amsterdam” at 10 p.m.

The Thursday comedy block will once again be anchored by “Superstore” at 8 p.m., followed by the new comedy “Perfect Harmony.” The series stars Bradley Whitford as a former Princeton music professor who finds himself unexpectedly presiding over a small-town church choir. “The Good Place” moves to 9 p.m., and “Sunnyside,” from Kal Penn, will air at 9:30 p.m. The series follows a disgraced New York City councilman who becomes a champion for a group of people dreaming of becoming American citizens. “Law & Order: SVU” returns at 10 p.m. for its 21st season.

“Brooklyn Nine-Nine” and “Will & Grace” will return mid-season, along with comedies “Indebted,” starring Fran “The Nanny” Drescher, and “The Kenan Show,” starring Kenan Thompson of “Saturday Night Live.”

Also being held for mid-season is drama “Blindspot,” which will return for its fifth and final season.

New mid-season dramas include “Council of Dads,” from executive producer Jerry Bruckheimer, which centers on a father who calls in his closest friends to serve as back-up dads following a health scare; musical drama “Zoey’s Extraordinary Playlist,” centering on a computer coder who starts to hear the wants and desires of people around her through songs; and the crime series “Lincoln,” based on the novel “Bone Collector.”