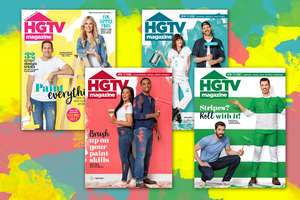 Cover stars: Chip and Joanna Gaines, who rose to fame through their hit HGTV home-renovation show “Fixer Upper,” have been making headlines lately as they’ve been plotting their post-HGTV empire; see “Discovery’s DIY Network to turn in to Chip and Joanna Gaines Channel” (subhead: “The still unnamed network will debut in summer 2020”), per Ad Age’s Jeanine Poggi. (“Fixer Upper" reruns, currently showing on HGTV, will move to the new channel to round out its slate of original programming, TBD.)

So... this might be good time for HGTV to remind everyone that they’ve still got a lot of continuing shows from homegrown stars who viewers love. Viewers and readers, that is—because today HGTV Magazine, the co-venture between the cable channel and Hearst Magazines, is releasing a sneak peak of its first four-way collectible cover split starring network talent (not named Chip or Jo).

For the glossy’s fifth-annual paint-themed issue, four duos—Christina Anstead and Tarek el Moussa of “Flip or Flop,” Drew and Jonathan Scott  of “Property Brothers,” Page Turner and DeRon Jenkins of “Flip or Flop Nashville” and Leanne and Steve Ford of “Restored by the Fords”—each get their own covers. Readers are invited to collect them all (four issues at $4.99 each would add up to pretty sweet revenue if a lot of HGTV fans buy the complete set), but we’re more interesting in who ends up selling the best. Stay tuned.

Stalk much?: The New York Post continues its arguably unhealthy obsession with a certain freshman congresswoman with a story this morning headlined “Ocasio-Cortez blown away by first experience with a garbage disposal.” Spoiler: It's a story about New York Rep. Alexandria Ocasio-Cortez's wry Instagram posting about a new home appliance.
+ Context: from Vanity Fair’s Joe Pompeo in March: “‘A.O.C. is the New Trump Bump’: Is Murdoch’s paper out to nuke the congresswoman—or just dabbling in a McCarthy-era traffic play?”
+ The AOC meme factory: “Why Is Everyone So Obsessed With AOC? Let's Analyze The Memes,” from Lam Thuy Vo of BuzzFeed News on Friday.

Global ambition: Recode’s Peter Kafka has a scoop about an intriguing Amazon push to grow overseas by partnering with U.S. publishers that have international appeal. He writes:

Amazon has a pitch for some US-based publishers: Expand overseas. We’ll make it worth your while. The world’s dominant e-commerce player is in talks with big American publishers, including The New York Times and BuzzFeed, about deals that would reward them for expanding their international presence, specifically in consumer-oriented shopping sites... Sources say Amazon has been proposing various deals that would give publishers money up front in order to expand their international sites or open up new markets.

Ad nauseam: “Advance Publications Inc., owner of the Condé Nast magazine empire and metropolitan newspapers, is on a $10 billion global shopping spree intended to diversify the company away from its traditional media holdings and reduce its reliance on advertising revenue,” The Wall Street Journal’s Jeffrey A. Trachtenberg reports in a story this morning headlined “Vanity Fair Owner Stages Its Next Act, With Musical Theater, Esports and Satellite Launches.”

And finally... The Economist has released an animated version of the cover of its current issue with the headline “Tech’s raid on the banks.” And in the magazine’s latest “Money Talks” podcast, released today, Helen Joyce “travels across Asia to see how fintechs like Ant Financial are transforming how people spend, save and invest their money, and asks whether traditional banks can catch up”—an audio companion piece for the cover feature. Have a listen here.