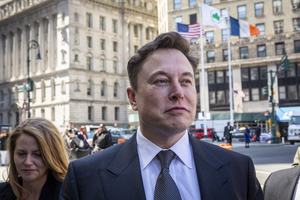 Elon Musk, who’s had federal regulators scrutinizing his Twitter feed and Tesla Inc.’s Autopilot technology, invited fresh attention to both by making light of a pornographic video filmed inside one of the company’s cars.

The chief executive officer sent a series of tweets loaded with double entendre Thursday after a video surfaced this week of two people having sex in a Tesla operating on Autopilot. “Turns out there’s more ways to use Autopilot than we imagined,” Musk wrote in his initial post. His followers replied with jokes of their own.

Musk, 47, is just two weeks removed from reaching an accord with the U.S. Securities and Exchange Commission, which sued him for fraud over posts last year about trying to take Tesla private.

The National Highway Traffic Safety Administration and National Transportation Safety Board also investigated several crashes last year involving Autopilot, including one in which an Apple Inc. engineer died in his Model X that steered into a concrete barrier. The driver’s family sued Tesla last week.

Tesla shares have dropped 27 percent this year. The stock pared declines last week as Musk hyped autonomous-driving technology as “transformative” to Tesla while ginning up interest in the company’s $2.7 billion offerings of new equity and convertible bonds.

A Tesla representative didn’t immediately respond to a request for comment on Musk’s tweets.