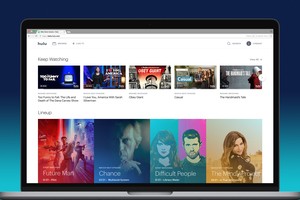 Walt Disney Co. will take full operational control of Hulu, in a deal with Comcast Corp. that will value the streaming service at more than $27 billion and steps up the fight against Netflix Inc.

The valuation represents a bet on continued rapid growth for Hulu, home of original hits such as “The Handmaid’s Tale.” Just a month ago, Hulu was valued at $15 billion when it bought out AT&T Inc.’s 9.5% stake. In its agreement, Disney guarantees Comcast an equity valuation no lower than $27.5 billion by early 2024, when Comcast can sell its stake to Disney.

Hulu stands to be a key driver in Disney’s aggressive streaming push. The entertainment giant expects Hulu to have as many as 60 million subscribers by fiscal 2024, up from 25 million last year, and is counting on it to complement the new Disney+ streaming service launching in November.

“We are now able to completely integrate Hulu into our direct-to-consumer business,” Disney Chief Executive Officer Bob Iger said in a statement.

The transaction, leaving Hulu run by just one media company for the first time, marks the end of one of the most complicated ownership sagas in the entertainment business. NBC and Fox founded Hulu more than a decade ago as a way for TV viewers to watch last night’s TV online. Disney acquired an equity stake later, and the three media giants argued over the direction of Hulu as Netflix lapped it in size. Netflix now has a market capitalization of $152 billion, 10 times Hulu’s most recent valuation.

Disney acquired majority control of Hulu this year by buying Fox’s stake as part of its $71.3 billion purchase of Rupert Murdoch’s entertainment empire.

Disney will split its TV shows and movies between its two entertainment streaming services, Disney+ and Hulu. Disney+ will house Marvel, Pixar, Star Wars and NatGeo. Shows from FX, which has aired “Sons of Anarchy” and “American Horror Story,” will be on Hulu, said FX CEO John Landgraf.

“I don’t see FX in Disney+ at all,” Landgraf said at a press briefing featuring presentations from the heads of most of Disney’s TV networks. Landgraf said he used to wish FX was its own standalone premium service. But, due to industry consolidation, it now makes more sense as a part of Hulu.