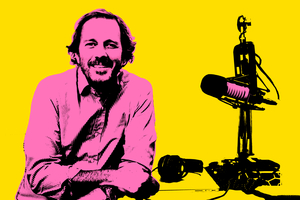 Subscribe to us on iTunes, check us out on Spotify and hear us on Stitcher, Google Play, iHeartRadio and Pandora too. This is our RSS feed. Tell a friend!

As much as any other brand, Chobani is responsible for the rocket-ship rise in popularity of Greek yogurt over the past decade. Now, it faces fresh challenges. Competitors enter the space seemingly every day, and sales have taken a hit over the past year: U.S. yogurt market sales slid about 3.3 percent in 2018 and the drop was even steeper in Greek yogurt (down 11 percent).

“We had a rough patch last year. It’s not fun,” says Chobani CMO Peter McGuinness, the latest guest on the “Ad Lib” podcast. McGuinness is Chobani’s first chief marketer, having joined the brand after a prolific agency career, first at McCann and most recently as CEO of DDB Chicago. “The category hit a speed bump last year, a confluence of over-promoting, irrational pricing, SKU proliferation.”

On the state of the modern marketer
In a wide-ranging discussion, McGuinness elaborates on the plight of the modern CMO, who has seen shrinking tenures until very recently.

“CMOs are very, very influential, but they’re not the sole reason for a brand’s demise or a brand’s better days. A lot of people blame CMOs for their own self-preservation and it’s frankly not fair,” says McGuinness. “The churn that causes hurts brands. You’re going to have a new CMO, she or he are going to want to do it their own way, reinvent the brand or rejuvenate the brand, and suddenly the brand is in chaos or churn and that’s not healthy for the business ultimately.”

On moving to the client side
Meanwhile, McGuinness says moving to the brand side has brought with it some unexpected self-awareness, after two decades in advertising.

“One thing I've learned from going on the client side is all the annoying things we did as agency people,” he says. “We can be annoying! I was super annoying. We don’t shut up and we know it all; we’re verbose, we don’t get to the frickin’ point, and we all think the CEO deeply cares about this shit. And they don’t because they have all this other stuff to do. As ad people, we can inflate ourselves a bit.”

On in-housing creative
McGuinness is less annoyed by agency types these days as Chobani is doing more than 90 percent of its creative work internally. (The work it did in 2018 won the brand an Ad Age A-List award for “Best In-House Agency” last month.)

“It works for Chobani. We are very fast moving; we change our mind a lot and we flex and stretch,” he says. “The designers, art directors and writers are so much more informed than they would ever be if they worked for the external agency.”

On taking a stand
We also discuss Chobani as a brand with purpose. Its founder, Hamdi Ulukaya, is a Turkish immigrant and outspoken defender of refugee rights. Ulukaya recently gave a TED talk explaining why the 40-year-old CEO playbook is breaking down.

“NGOs and governments are not going to solve the world’s problems,” says McGuinness. It’s up to the entrepreneurs he says—while acknowledging if activism isn’t core to your brand’s founding principles, it will ring hollow with consumers. “It works for a Chobani, a Patagonia or a Nike it’s because it’s what it’s all about. From day one we stood for inclusion and equality.”

Listen to the podcast for all that plus more on his career arc and how he says his father, instrumental in the “Made in the USA” movement, inspired him to be a communicator.