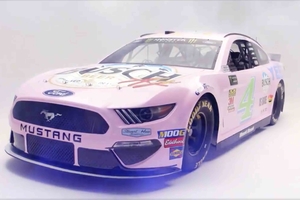 "Millennial pink” has appeared on everything from phones to fashion, and now it's crossing another threshold. Busch Beer revealed a millennial-themed race car for Kevin Harvick, who will drive it in this month's Monster Energy NASCAR All-Star Race.

The joke is on Harvick, who is 43, too old to be a millennial. Back in November, Busch Beer bet that Harvick would win the Homestead-Miami Speedway race -- and if not, it promised to sponsor a car with a millennial-themed paint job for him. "Old guys will rule again at Homestead," the Anheuser-Busch InBev brand tweeted at the time.

Harvick didn't win -- he ended up coming in third, and Busch made good on its word.

The joke doesn’t stop with the paint job. On Twitter, Busch polled its followers about how it should decorate the car. The result is a Ford Mustang affixed with stereotypical slang and images pinned to millennials: avocados and toast, emojis, Snapchat filters and stickers reading “Squadgoals,” “Skrrrt Skrrrt,” "Busch is bae” and “AF.”