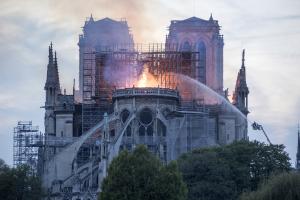 Soon after a fire engulfed Notre-Dame cathedral in Paris on Monday, news outlets began streaming live broadcasts on YouTube. Below several of the clips was an odd box of text: A snippet from Encyclopedia Britannica about the Sept. 11 terrorist attacks.

YouTube, a division of Alphabet Inc.’s Google, introduced this text box feature last year to combat the spread of conspiracy theories, including those that question the 9/11 attacks. On Monday, YouTube’s software mistakenly labeled the plumes of smoke in Paris as footage from 2001, triggering the panel below the video.

“We are deeply saddened by the ongoing fire at the Notre-Dame cathedral,” said a YouTube spokesman. “These panels are triggered algorithmically and our systems sometimes make the wrong call. We are disabling these panels for live streams related to the fire.”

YouTube has been battered with criticism over extreme and misleading videos, especially around breaking news topics. While the service has become the world’s largest video site, it has struggled to use software and human reviewers to understand and police the millions of hours of footage that gets uploaded daily.

Last month, video of an attack on mosques in New Zealand was streamed on YouTube and other social media services. Videos questioning important facts, such as the moon landing and the efficacy of vaccines, have also run rampant on YouTube, prompting inquiries from U.S. lawmakers.

Last year, YouTube CEO Susan Wojcicki unveiled the information boxes as a solution that she hoped would help quell conspiracy theories. The text is pulled from websites including Wikipedia to counteract misleading videos with well-established facts.

The company has said it shows “tens of millions” of the text panels below videos each week.