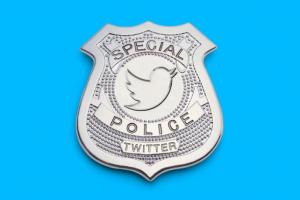 Twitter is taking down abusive tweets without waiting for user complaints to first identify the bad actors, the company says in a new report about detoxifying the service.

On Tuesday, CEO Jack Dorsey, speaking at a TED Talk, disclosed his latest plans to purge harassers from the platform, or at least silence them. Dorsey said Twitter will test a mute button, which will allow people to hide replies to their tweets at their own discretion. This means a person who initiates a conversation, as the original tweet’s author, they can hide objectionable comments replying to the original tweet. Readers will have to tap on the hidden tweet to reveal it.

That’s just one of a number of tweaks already made on the media messaging service as it tries to clean up troll-like behavior that has haunted the product for years. In fact, Twitter says it only started proactively removing abusive tweets in the past year. Before that it relied on users to report harassment first.

Now, Twitter says it identifies 38 percent of the abusive tweets that get penalized on the platform—before the policy change last year Twitter uncovered zero percent of abusive tweets before first being tipped off.

“People who don’t feel safe on Twitter shouldn’t be burdened to report abuse to us,” Twitter wrote in a blog post Tuesday attributed to Donald Hicks, VP of Twitter service, and David Gasca, senior director of product. “Previously, we only reviewed potentially abusive Tweets if they were reported to us. We know that’s not acceptable, so earlier this year we made it a priority to take a proactive approach to abuse in addition to relying on people’s reports.”

The company also revealed that between January and March it suspended 100,000 accounts created by users who were previously suspended, a 45 percent increase in enforcement from the same period a year ago.

While Twitter is claiming some initial success combating trolls, it has been a long time in coming. Dorsey’s predecessor Dick Costolo, who left in 2016, has said that his biggest regret was not fixing the bullying problem on Twitter. Twitter has been under the same scrutiny as Facebook and YouTube following the 2016 U.S. election, when the online platforms were breeding grounds of disinformation and targeted harassment used to control the digital conversation.

“We have witnessed abuse, harassment, troll armies, manipulation through bots and human-coordination, misinformation campaigns, and increasingly divisive echo chambers,” Dorsey tweeted last year as he pursued new policies focused on the “health” of Twitter. “We aren’t proud of how people have taken advantage of our service, or our inability to address it fast enough.”

Advertisers are concerned about the Twitter environment, because brands don’t want to appear on the same screen as offensive messages. The tide appears to turning for Twitter, however, as it has focused on fixing the core problems while not fixating on user growth or retaining harmful accounts just to boost user numbers.