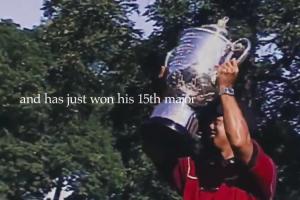 Nike, which has stuck by Tiger Woods through is his playing highs and lows and off-course scandals, celebrated his big Masters win Sunday with a video that plays into the brand’s ongoing “Crazy Dreams” campaign.

The video by Wieden & Kennedy, called “Tiger Woods: Same Dream,” was shared on social media just moments after Woods won his first major championship since 2008. It included glimpses of the 43-year-old’s on-course ups and downs, and ended with old footage from Woods’ childhood, when he predicted that “I’m going to beat Jack Nicklaus.” That is seemingly a reference to Woods now being within three major tournament wins of Nicklaus’ all-time record of 18 major titles.

The Masters win, which marks Woods’ 15th major championship and fifth Masters win, could not come at a better time for Woods, Nike and the golf industry in general. With the 2019 season just kicking into gear, Wood’s re-emergence, if he can keep it going, will likely fuel TV ratings throughout the summer.

Nike stuck by Woods through his 2009 sex scandal as other endorsers backed away, including Gatorade, AT&T and Accenture. The brand also stayed with him in the wake of his DUI arrest in 2017.  But today, and likely for the foreseeable future, Woods will be linked with a more wholesome image: CBS cameras caught extreme close-ups of him hugging his kids after walking off the 18th green where the crowd chanted his name. In sports, few things resonate like a comeback story.