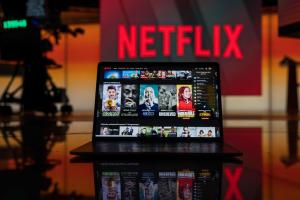 Netflix says it is not worried about Apple or Walt Disney as they prepare rival direct-to-consumer video services, likening the competition to cable TV in the 1980s—there’s room for everyone.

On Tuesday, the streaming video player discussed its prospects as part of its quarterly earnings report, in which it reported revenue of $4.5 billion, a 22 percent increase from the same quarter last year, and added 9.6 million subscribers to hit 148.9 million users worldwide.

“We don’t anticipate that these new entrants will materially affect our growth because the transition from linear to on-demand entertainment is so massive and because of the differing nature of our content offerings,” Netflix wrote in its letter to shareholders on Tuesday. “We believe we’ll all continue to grow as we each invest more in content and improve our service and as consumers continue to migrate away from linear viewing (similar to how U.S. cable networks collectively grew for years as viewing shifted from broadcast networks during the 1980s and 1990s).”

Investors were concerned about the forecast for the second quarter, which predicted growth of only 5 million subscribers and revenue of $4.9 billion, which were lower than Wall Street analysts anticipated. The stock dipped a little, about one percent, in after-hours trading.

The battle for connected TV entered a next phase within the past month as both Apple and Disney revealed rival services to Netflix. Apple TV Plus and Disney Plus both promise ad-free, premium TV shows and movies. Apple is relying on a bundle of network and studio partners to provide the bulk of its fare, and Disney has its own library and all the properties from its acquisition of 21st Century Fox.

Disney surprised the market last week by pricing its subscription at $7 a month, while Netflix’s most popular subscription costs $13 a month.

Netflix touted the popularity of a few original movies and series released in the first quarter, such as the Ben Affleck feature film “Triple Frontier,” which was viewed by more than 52 million households in its first four weeks. That did not come close to “Bird Box” in the prior quarter, the Sandra Bullock horror thriller that reached 80 million households in its first four weeks.

Also, the much hyped Fyre Festival documentary, about the viral scam event, reached more than 20 million households in its first four weeks.

The service also said it plans to publicly disclose more about what’s trending, at least in the U.K, where it will test a “Top 10” list revealing the week’s most-viewed shows and movies. Netflix says it will decide if it will expand that feature to other countries within a few months.