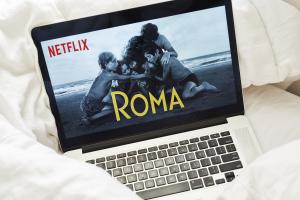 Netflix is planning its first magazine, but you won’t find it on a newsstand.

The world’s largest online TV network plans to publish a journal—with the working title Wide—to promote its programs and stars ahead of this year’s Emmys, the biggest awards gala in TV. The 100-plus page inaugural issue will be distributed to industry players (circulation to be determined) and will include interviews, essays and features about and by people who work on Netflix series, according to emails reviewed by Bloomberg News.

Netflix has spent many millions of dollars in pursuit of Hollywood awards, which help burnish the image of the streaming service’s still-young studio in the eyes of consumers and the entertainment industry. Last year, the company tapped veteran publicist Lisa Taback to oversee its awards operation, and recently hired Krista Smith, an editor from the magazine Vanity Fair, to assist.

“In preparation for a groundbreaking year in film and television, Netflix has gathered some of the most talented and sought after writers and photographers, thinkers and creatives, to make the inaugural issue of Wide, the Netflix print journal,” according to one company email seen by Bloomberg News.

Netflix aims to distribute the publication in June, when members of the television academy vote on Emmy nominations. Netflix has asked collaborators to participate in photo shoots and interviews.

But the publication isn’t only about awards. Netflix is testing different ways to promote upcoming titles to people in the industry and will distribute the publication at events it stages. Last year, the company took over a building in Los Angeles for a month, hosting screenings and parties.

Started as a DVD-by-mail service in Los Gatos, California, Netflix has blossomed into one of the world’s largest media companies, with a market value and production slate to match. While Netflix still employs a corps of engineers in Silicon Valley, it is shedding its reputation as an entertainment outsider and is courting film and TV’s biggest stars.

The company operates a studio in the heart of Hollywood that includes multiple sound stages and an animation hub, and has opened production facilities in New Mexico and Spain. Netflix also is in talks to buy a historic Hollywood movie theater for premieres and other events.

Critics of Netflix say shows get lost amid the volume of new programs released each week, and that talent isn’t nurtured at Netflix the way it is at other studios. The company is sensitive to those claims, and has hosted agents and talent to explain why its processes differ other companies.

Criticism aside, the results have been good. The streaming service is nearing 150 million customers worldwide, and earned the most Emmy nominations of any network last year, edging out longtime leader HBO. That said, it has yet to capture any of the top three prizes: best drama series, best comedy series and best limited series or movie.