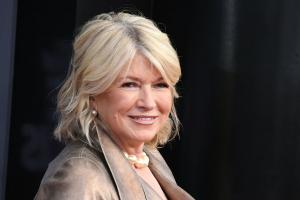 What people are talking about today
How much is the Martha Stewart brand worth? Way less than it was just a few years ago, according to the New York Post. The Post reports that Stewart’s homemaking empire is being sold to Marquee Brands for $175 million, plus up to $40 million extra if the brand performs well over the next few years. (The deal also includes the Emeril Lagasse brand.)

Bottom line: It’s a steep comedown from the $353 million that current owner Sequential Brands Group paid for Stewart’s brand in 2015. The Post says Sequential “had been looking to unload Stewart’s brands since last fall because of the skyrocketing costs of her perks and pay.”

It’s also worth noting that Stewart has more competition now in the category, including Chip and Joanna Gaines of HGTV “Fixer Upper” fame. Not only do they sell throw pillows and faux flowers at Target, they’re about to get their own cable network. Basically, they're the Martha Stewarts of 2019.

Our Lady of Charity
Apple and L'Oréal are among the companies that pledged funding to rebuild Paris’ Notre Dame cathedral after a fire tore through the medieval treasure and toppled its spire, as Ad Age’s Olivia Raimonde reports. Of note: The two rival families that dominate France’s luxury sector are each giving huge donations. The Pinaults--the family behind Gucci and Yves Saint Laurent--pledged about $113 million through their investment arm. As for the Arnault family and LVMH Group (owner of Louis Vuitton, Givenchy and Christian Dior), they’re giving twice that, around $226 million. Thank goodness for corporate rivalry.

Not a done deal
The merger between T-Mobile and Sprint may be in trouble. The Wall Street Journal reports that:

“Justice Department antitrust enforcement staff have told T-Mobile US Inc. and Sprint Corp. that their planned merger is unlikely to be approved as currently structured, according to people familiar with the matter, casting doubt on the fate of the $26 billion deal.”

T-Mobile CEO John Legere tweeted that “the premise of [The Journal's] story, as summarized in the first paragraph, is simply untrue.” But it’s not farfetched to think U.S. regulators might have antitrust concerns about combining the No. 3 and No. 4 carriers. During the Obama era, a previous attempt to combine the two brands fell apart amid concerns that regulators would say no.

Tiger, burning bright: Tiger Woods’ win at the Masters -- his first major championship in 11 years -- was “a reminder that live TV remains as relevant as it’s ever been during moments like this,” Anthony Crupi writes in Ad Age.

#MeToo: “A University of Minnesota student accused Richard Liu, the billionaire founder of the Chinese e-commerce giant JD.com, of rape in a lawsuit filed in Minneapolis on Tuesday, four months after prosecutors declined to pursue a criminal case,” The New York Times reports.

ICYMI: The National Rifle Association is suing its longtime ad agency, Ackerman McQueen, which operates NRATV, The New York Times reports. “The suit asserts that Ackerman has concealed details from the N.R.A. about how the company is spending the roughly $40 million that it and its affiliates receive annually from the association,” The Times says.

Two Ad Age podcasts to check out: Cameron Farrelly, chief creative officer at Virtue Worldwide, talks to I-Hsien Sherwood and Alfred Maskeroni about why he’ll “go to the end of the earth” for stuff he loves collecting--like wind-up toys. That’s the “Ad Block” podcast, with advertising people talking about interests outside advertising.

Meanwhile, in E.J. Schultz’s “Marketer’s Brief” podcast, hear why the Biofreeze topical pain relief brand is upping its game (it used to go with super-basic brand assets, with Arial font and a clip art icon).

Ad of the day: What would you do for a Klondike bar? Would you name your baby “Klondike” for a lifetime supply of ice cream, maybe? The Unilever brand is resurrecting its “what would you do?” line in ads starring Anna Faris; she tests whether people will “go to somewhat ridiculous lengths for a Klondike bar,” as Ad Age’s Jessica Wohl writes. Check it out here.