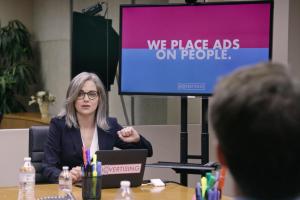 For the first time in years, Klondike is asking “what would you do for a Klondike bar?”

A new online campaign stars Anna Faris testing whether people will go to somewhat ridiculous lengths for a Klondike bar. In one scenario, the actress is disguised as a seemingly serious marketer from a media company called Biovertising. She asks soon-to-be parents for the naming rights of their unborn children. In another, Faris plays a psychic who leaves one customer with Klondike bars in exchange for reading a new customer’s tarot cards.

“What would you do for a Klondike bar” was often featured in a sing-songy tune in commercials in the 1980s and 1990s. More recently, the brand has held off from using the line overtly in ads. Instead, it’s been promoting new varieties of the frozen novelties.

Perhaps the current nostalgia for the ’80s and ’90s, from TV series reboots to the return of styles such as bootcut jeans, means there’s an appetite for Klondike’s challenge-driven premise.

“It was time to go back and reinfuse the core equity with a fresh approach,” says Leeann Leahy, CEO of the Via Agency, which has been working with the Unilever brand for years.

The brand could use the boost. Klondike’s U.S. retail sales rose 0.1 percent to $309.9 million in the 52 weeks that ended March 24, while the overall frozen novelties category was up 5.8 percent to nearly $4.06 billion, according to data from Chicago-based research firm IRI.

The “what would you do” line tested with a broad variety of demographics, according to the agency. Still, Klondike has its sights on a particular target of millennial men and women. The agency refers to the target married couple as Susan and Steve. Often, it’s Steve who eats the treats and Susan who buys them, says Leahy.

In the baby naming video (spoiler alert), one couple agrees to the naming plan under somewhat altered terms proposed by the husband. Then, his wife quickly jumps on board.

The spots are set to run online. Klondike worked with director Jeff Tremaine (one of the creators of “Jackass”) on the content, which was filmed in Los Angeles.

Via’s earlier work on the brand, “5 seconds to glory,” included the “what would you do” line as more of a tagline. Its campaign for Klondike Kandy Bars, called "The Best Ice Cream Bar Ever Conceived," began running in 2014. In those suggestive cartoon takes on the creation of the bars, the tune was mixed into the background music.