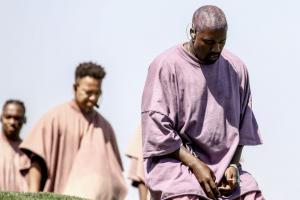 What people are talking about today
Kanye West hosted an emotional, gospel-inflected Easter Sunday performance during the last day of the Coachella festival. The music and performances at the set—called a "Sunday Service"— nodded to Christian spirituality. Meanwhile, West raised eyebrows by selling some pricey merch at a tent marked “Church Clothes." Variety reports:

“The collection was made up of neutral-hued items each bearing various god-fearing slogans, including ‘holy spirit,’ ‘trust god’ and ‘Jesus walks’ on a pair of socks. Prices for sweatshirts range from $165 to $225, and the socks are $50.”

The merchandise, and the price tags, sent Twitter commenters into overdrive. Many felt if West is looking for redemption and relevance after hard times and endless controversies, it might be sensible to hold off selling $225 crewnecks with "HOLY SPIRIT" written across the chest.

A quick scan of the Facebook Ad Library suggests that centrist Schultz started running many different ads this month and spent only a tiny amount of money on this particular message. But this is the one people are talking about.

Happy Earth Day
Factoid of the day: Today’s holiday got its name thanks to the late, legendary ad man Julian Koenig, who was also widely credited with creating Volkswagen's "Lemon" and "Think Small" campaigns. Without Koenig’s intervention, it’s possible the event might have been called something considerably less catchy: the Environmental Teach-in. Years ago, Koenig stepped in to ask how he could help the fledgling movement. “He offered a bunch of possible names—Earth Day, Ecology Day, Environment Day, E Day—but he made it quite clear that we would be idiots if we didn’t choose Earth Day,” environmental activist Denis Hayes wrote in an email that was quoted in Koenig’s 2014 New York Times obituary. Hayes and the team finalized the choice over pizza and beers. That was back in 1970, and the name has been going strong for 49 years.

Just briefly:
Blocked: “The Sri Lankan government blocked access to Facebook and other social-networking sites Sunday after suicide attacks killed more than 200 people,” The Washington Post reports. The move was meant to prevent misinformation from spreading, but it also made it hard for people to check on the safety of their loved ones.

User data: A study on 36 apps to help people manage their depression or to quit smoking “revealed that 29 of them were sharing data for advertising or analytics to Facebook or Google, but many of them weren't disclosing that to users,” Endgadget reports.

Beyonce + Netflix: Netflix has scored “a three-project deal with Beyonce worth a whopping $60 million,” Variety reports. "The first of the three specials is 'Homecoming,' the behind-the-scenes documentary chronicling her 2018 Coachella performance," which is on Netflix now.

Ad of the day: Apple's got an Earth Day ad that's nothing like most Earth Day ads. For one, it's set to music by heavy metal band Megadeth. Ad Age's I-Hsien Sherwood writes that it's an “up-close homage to the power and ferocity of Mother Earth." That includes a shark chomping on another shark’s face. All the shots were filmed on an iPhone XS. Check it out here.