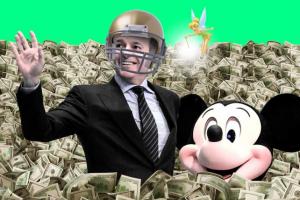 Walt Disney Co. received final-round bids of about $10 billion and up for the Fox regional sports networks, with John Malone’s Liberty Media Corp. and Sinclair Broadcast Group among those vying for the assets, according to people familiar with the matter.

Liberty is teaming up with Major League Baseball on its offer, said the people, who asked not to be identified because the negotiations are private. Ice Cube’s Big3 U.S. basketball league also has made a bid, they said. The entertainer has lined up Serena Williams and Snoop Dogg as content partners if he succeeds in acquiring the networks.

Disney agreed to sell the properties to get clearance for its $71 billion takeover of 21st Century Fox’s entertainment empire, a transaction that closed last month. Regulators were concerned that the company would have too much control over sports television if it owned both ESPN and the regional broadcasters. Disney has to sell the networks within 90 days of the Fox deal’s completion on March 19.

The New York Yankees decided to buy back their network from the group, removing a crown jewel that’s valued at about $4 billion. And several deep-pocketed potential suitors, including Comcast Corp., Discovery  and the new Fox Corp. itself, bowed out of contention for the remaining networks.

That hurt Disney’s ability to command top dollar. Analysts estimated that the collection could fetch $20 billion to $22 billion, but bids for the 21 properties -- not counting the Yankees’ channel -- have been closer to $10 billion.

Disney’s bankers have suggested spinning off the networks to shareholders, rather than selling them. But the company has remained committed to the auction, people with knowledge of the matter said earlier this year. A spinoff would require approval from the Justice Department, but the agency is likely to give the green light.

Ice Cube’s Big3, meanwhile, has complained that Charter Communications has tried to torpedo its bid for the networks. The group alleges that Charter has threatened to drop the channels from its cable systems in an attempt to help Liberty -- Charter’s biggest shareholder -- win the assets. Big3 asked the U.S. Justice Department’s antitrust division and the Federal Communications Commission to look into Charter’s conduct.