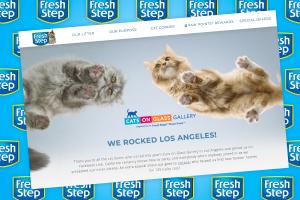 Renowned photographer Jill Greenberg is suing McGarryBowen and Clorox Co. for copyright infringement, She alleges that they went far beyond the contracted scope of use for “Cats on Glass” photos she shot for Fresh Step cat litter by featuring them in pop-up galleries, social videos and a segment on "The Ellen Degeneres Show."

The suit raises questions about how far brands can go reusing copyrighted work from ads, including for publicity purposes. According to the complaint, despite a contract that excluded video use, Dentsu's McGarryBowen or Clorox “controlled and arranged interviews and content” that used Greenberg's copyrighted work for local TV news broadcasts, the "Ellen" show, branded content and influencer posts.

Greenberg is known for her animal portraits, including those found in The New York Times bestselling book “Monkey Portraits, Plus a Few Apes.”

McGarryBowen contracted with her in late 2017 to create a series of five portraits of cats on glass, playing off of a popular social-media meme. A purchase order filed with Greenberg's April 16 complaint in U.S. District Court in New York excludes use of the photos in video, though it allows a wide range of uses in print, out of home, product packaging, and retail display over two years. Greenberg got paid $115,450, including more than $85,000 for expenses.

The original shoot showed the cats against a white background, but Greenberg says McGarryBowen asked for revisions using a blue background with a halo similar to her fine art work.

Among the things not discussed, she tells Ad Age, was using the photos in pop-up Cats on Glass galleries in New York and Los Angeles last year and early this year, which Fresh Step opened to promote adoption of shelter cats. The New York gallery was a block from Greenberg’s Clampart gallery in Chelsea, though she says she wasn’t invited to visit or informed in advance it was opening.

“In my 27 or 28 years of shooting advertising images, it never crossed my mind that my kitty litter ads would be put up on the wall of a Chelsea gallery,” Greenberg says, “and referred to as fine art photography.”

Influencers compensated by Fresh Step posted video from Fresh Step’s galleries that showed Greenberg’s photos, according to the suit. The photos also showed up in a segment earlier this year on "The Ellen Degeneres Show" and in TV news broadcasts in New York and Los Angeles. The complaint lists all those uses as infringements, along with distribution of the photos as downloadable art or mobile wallpaper to reward members of Fresh Step’s Paw Points loyalty program. The latter use amounts to selling the images as merchandise, Greenberg contends.

Despite discussions and a cease-and-desist letter sent in November, Greenberg and her attorney say the defendants refused to take down infringing uses.