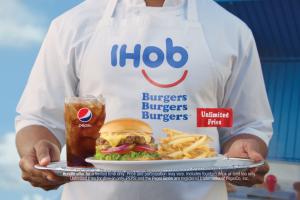 A simple flip of a letter transformed the International House of Pancakes into the International House of Burgers in this campaign to get the word out that the restaurant  doesn’t just do delicious flapjacks—its burgers are pretty good, too. The campaign got everyone from Conan O’Brien to the Washington Post talking, leading to a total of 42.5 billion impressions equal to more than $113 million in earned media value, the client says. Despite a mixed reaction, the idea was a business success. In the weeks following the campaign launch in fall of 2018, the client says its burger sales quadrupled, and since then, sales have held steady at double the prior year’s sales.