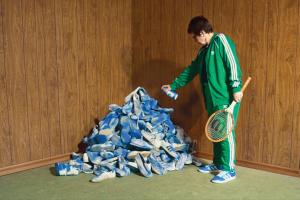 To mark tennis pro Billie Jean King’s impact on women’s rights and on the athletic establishment, Adidas and TBWA/Chiat/Day New York tapped artists to transform some of the brand’s most popular shoes like Stan Smiths, Barricades and NMDs into her iconic blue and white trainers--the ones she wore during her historic “Battle of the Sexes” against Bobby Riggs more than 45 years ago. But the stunt didn’t stop there. At Adidas’ store at the U.S. open, the brand invited attendees to “Billie Jean King” their shoes too--whether they were Air Jordans, Converse or Louis Vuitton. According to the agency, following the campaign, Adidas tennis sales in the U.S. increased 20 percent and the Barricade, the brand’s top tennis shoe, saw 103 percent sales jump Stateside.