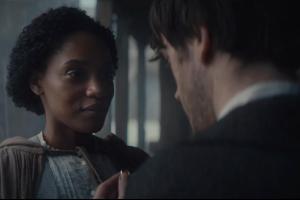 Genealogy company Ancestry has taken down a recent commercial following public outcry that the ad whitewashes slavery. The Lehi, Utah-based company removed the ad from YouTube on Thursday and is in the process of pulling it from TV, according to a spokeswoman.

“Ancestry is committed to telling important stories from history,” the company said in a statement. “This ad was intended to represent one of those stories. We appreciate the feedback we have received and apologize for any offense that the ad may have caused.”

The 30-second spot depicts the apparent love story of an interracial couple in the 1860s. The white man tells a black woman that they can be together across the border in Canada. Many viewers criticized the commercial for whitewashing interracial relationships during that time; often black slaves were raped by their white owners, which resulted in mixed race children. One person on Twitter said that ancestry information for blacks “is as painful and traumatic as it is illuminating” because of such concerns.

The ad was part of a larger effort that uses history to promote the mystery behind genealogy, which Ancestry’s DNA tests help to solve. The campaign, which includes three 30-second spots, is the brand’s first work from Anomaly, which won international creative duties for Ancestry last fall. Ancestry is also under new marketing leadership following the December departure of its chief marketing officer, Vineet Mehra, who is now global CMO of Walgreens. Todd Pollak recently joined Ancestry as senior VP of global customer experience and product commercialization from Google; Caroline Sheu was also promoted to senior VP, North American marketing and is the top marketer at the company.

Brands are increasingly coming under fire for campaigns or products that many view as culturally insensitive. Adidas, Prada and Gucci recently released, and subsequently removed, products that were criticized for being tone-deaf to blacks. Experts say that such problems arise when brands don’t have enough diverse representatives making the marketing and product decisions.

The Salt Lake Tribune first reported on the backlash behind Ancestry’s ad.