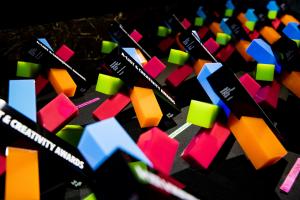 This past Monday, Ad Age feted the finalists for our Agency A-List & Creativity Awards in New York. On a night when Wieden & Kennedy won Agency of the Year for the second year in a row, members of the Ad Age Amp community also had plenty to celebrate, including spots on the Agency A-List, Production Company A-List, Agency Standouts, Production Company Standouts and Agencies to Watch. Congratulations to all the winners, finalists and especially fellow Ampers.

Work & Co
Agency A-List No. 6
Six years after opening its doors in Brooklyn’s DUMBO neighborhood, Work & Co has grown from five founder-partners to almost 300 employees. The shop has stood out by being a model of the modern “digital product agency” in both its approach to building client relationships and its flat and non-traditional leadership structure, which has helped lead to a 93 percent employee retention rate. “We’re not trying to create an environment or quote-unquote ‘culture’ where [people] feel like they have to stay later because other people are staying late,” Design Partner Casey Sheehan told Ad Age. “We’re really trying to encourage people to go home to their family, go home to their friends, go home to whatever they’re passionate about outside work and make sure that’s a priority in their lives.” Among Work & Co's wins last year: the addition of high-profile new clients including Mercedes-Benz, Gatorade, Ikea and Equinox.

FCB
Agency A-List No. 7
It’s no wonder FCB landed a spot as one of this year’s top ten agencies, with Creativity Award nominations including Experiential Campaign of the Year for Burger King’s “Whopper Detour” (which used geo-fencing to troll its top competitor by directing app users to visit a McDonald’s location, order a one-cent Whopper, and pick it up at the nearest Burger King) and Tech Application of the Year for "Posts Into Letters" (a call to activism following the Parkland shooting, which allowed users to write letters to Congress in a font based on victim Joaquin Oliver’s handwriting).

Somesuch
Production Company A-List
After last year’s win as Production Company of the Year, Somesuch returns to the A-List, using its trademark focus on artful craftwork to advocate for gender parity and social justice. Among this past year’s standouts: following up the acclaimed “Blood Normal” for Libresse by director Daniel Wolfe with fellow director Kim Gehrig’s “Viva La Vulva” spot for the feminine care brand, which featured a chorus of vulvular objects singing a women’s empowerment anthem, and Raine Allen Miller’s celebrity-filled music video for Secret deodorant lamenting the gender pay gap. Their colleague Steve Rogers directed Tourism Australia’s “Dundee” commercial for Droga5, this year’s winner for Content Marketing of the Year.

OKPR
Agency Standout
Chicago’s O’Keefe, Reinhard & Paul had such a successful year—including becoming the agency of record for Chili’s—the shop was able to buy back its independence from investor Interpublic Group of Cos. “They make us feel like their only client, they’re fast and they’re just really creative,” Chili’s Chief Marketing and Innovation Officer Steve Provost told Ad Age. Other notable work included projects for Nike, Big Lots and the Illinois Lottery. The agency also continued its collaboration with Groupon and Tiffany Haddish.

Pulse Films
Production Company Standout
What happens when a creative force in filmmaking turns its focus to advertising? In Pulse Films' case, viewers get to see compelling commercials on a par with the production house's non-branded work. Pulse earned its spot on our list of Production Company Standouts with gripping shorts for clients ranging from National Geographic ("Nujeen") and Levi's ("Use Your Vote") to Volvo ("The Unseen Ocean") and Samsung ("The Future").

Erich & Kallman
Agency to Watch
Erich & Kallman has found success with its ability to turn around projects quickly by relying on a network of freelance creatives. “We bring in more world-class talent only when we need them, expanding and contracting constantly based on our needs,” the agency tells Ad Age. Founded just three years ago by Steve Erich, ex-president of CP&B, and Eric Kallman, Goodby, Silverstein & Partners' former executive creative director, the shop has put together an impressive portfolio of clients, including Reese’s, Lucky Charms, Chick-fil-A, and MTV, and becoming agency of record for New Belgium's Fat Tire beer. “We’re fast, we’re lean and we know how to make brands famous,” Erich told Ad Age.

Tombras
Agency to Watch
In 2018, the family-owned Tombras Group made strides toward become the agency of record for both the historic Southern burger chain Krystal and BB&T Bank. The Knoxville, Tennessee-based shop continued its quirky social-media work for Moon Pie and attracted new business from clients including Paddy Irish Whiskey, Boston Market and Walmart. Tombras' Facebook Live concert featuring Mason Ramsey, the 11-year-old "Yodel Boy" who became a viral sensation after being discovered in a Harrisburg, Illinois, Walmart singing Hank Williams' "Lovesick Blues," was a social media smash for the retailer, attracting 3.6 million views.

VMLY&R
Agency to Watch
What's in a name? Everything, according to the Mr. Mxyzptlk-like trail of consonants formed from WPP's merger of VML and Y&R last September. Announcing the news, WPP CEO Mark Read said VMLY&R would become a “contemporary, fully integrated digital and creative offering to clients on a global scale,” an intention signaled by the decision to give the younger, more digitally savvy VML (its "LegoPress" campaign for LEGOLAND Florida Resort was a finalist for this year's Craft of the Year) top billing over the legendary ad agency in the new name. The shop has won some noteworthy new business in the months since, including Tenet Healthcare, 3M, AIG and Japan's All Nippon Airways. With industry onlookers curious about the prospects of this marriage, VMLY&R is truly an agency to watch.